Published by Ana Rodrigues on the 4th June 2019

The other week I think I retired the talk I’ve been giving about blogging and ended a one year journey. The process began at Global Diversity CFP day in January 2018. I’ve had the opportunity to contribute to their blog about my experience but it took me a while until I gave my very first talk which happened at ViewSource.

My talks have been converted into a blog post awhile back and it had a new update after my last talk. I will still update it whenever I see new content worth sharing.

But I have feelings and things I’ve learned in the process that I want to write down. The fun thing about feelings and emotions is that sometimes they don’t have a solution. You just have to go through them.

Last year I think I ended on a high (a big high comparing to myself!!)! I did three talks and I was pretty happy and proud of myself that I accomplished my goal for the year.

However 2019 hasn’t been the kindest to me. I have mentioned this in passing in previous blog posts but I have been having lots of bad days especially around anxiety. I freeze a lot and can’t move or think and I haven’t been too kind to myself. I would see lots call for papers being promoted everywhere and I had this (wrong) FOMO feeling all over me that would end up with me feeling like crap because I wasn’t doing “anything”. I also submitted crap talk proposals thanks to it. I gave in to the pressure and still feel like I made a fool of myself. I applied to some things outside talks proposals that were also rejected. This was a bummer.

I’ve set the expectations for myself too high and I have been disappointed with myself. My dissonance may be tricking me but I think I was aware it was happening. My thoughts were all around “heck, you did so many things last year and now you’re doing nothing” but I wasn’t practising what I learnt in therapy and let myself get hurt. I can be my own worst enemy sometimes.

Looking back, I was pretty lucky. The talks I did last year, I got them done in one month and with familiar audiences. Let me explain:

This was my very first talk in 2018. I would only have 5 minutes and 20 slides in total, 15 seconds for each slide exactly. I was informed the Sunday before the event that my talk had been selected and I was kindly asked to send my slides on Tuesday. So I did that and technically “closed” my slides on Tuesday. I was so nervous and excited especially given the format that I practised as much as I could.

I was a wreck that morning. I was annoying and emotional but there was a small part of me that was saying “Ana calm down. You only learned a couple of days ago that you were doing this. It is not your fault”. So after the talk was done this was the thought I was holding down to. I was thinking “you did the best you could with the time you had”.

It wasn’t perfect. Far from it. I saw the video afterwards and I was cringing a lot because I noticed all my arm movements and how loud and nervous I was. I learned a lot from watching that video. To my surprise the feedback I received was positive.

These talks happened really close to each other. I was happy and comfortable that I could do my own slides and at my own pace. I had a 20 minute slot which, to me, was perfect. But also, I knew the audience well so I knew they were a safe and supportive space. I also received some good feedback on it or at least some people who related to my experience. My guess is that I was thriving with positive feelings and that helped to smile more, make jokes and have energy.

My positive feelings have been mostly gone (for a variety of personal reasons) and I had no idea they would impact giving a talk I have given before. My genuine thought was: “I’ve done this before, it will be okay”. And it was okay, but this year my brain re-wired itself in a bad way and I see the less nice things first.

Inspired by a tweet from Jo, I told myself: “I guess I need to create my own opportunities if I want to do this more”. I put out a tweet asking if anyone would be interested in listening to my talk about blogging and one meet-up was interested. I knew that it is a very niche topic and not many people would be interested in it. Not only that but also I am not a name in the industry. The outcome from that tweet was a talk booked for May so I had a couple of months to prepare. That was one of the very few moments that “I put myself out here” and I was expecting to feel as humiliated as a drunk tweet. It was fine. It obviously wasn’t a very popular tweet and but I didn’t die from embarrassment.

Back in September 2018, in State of the Browser, I had a quick chat with Jeremy Keith where he mentioned drawing your inner critic when preparing for talks (and that is also shared on his journal). This was before I had done my talks so I thought “okay, that is interesting” but I had not met side B Ana yet. Until this year. 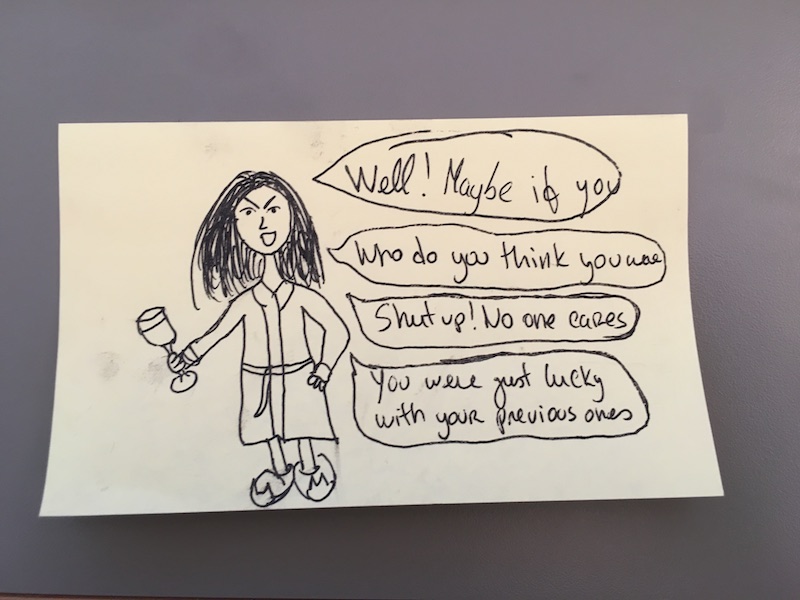 She finally appeared in full force like the last boss of a game when I was in Leeds for All Day Hey! on the day before when I was rehearsing. And in the morning, and during the talk. I will never forget when I looked at my slides at saw 06:19 mark and my heart sank. I thought “I’m on stage talking about myself” and this feeling of shame took over me in a way that I don’t remember feeling before.

I made a crucial mistake that day. I sat alone and I allowed my negativity and my other Ana to take over me. Half way through the morning I thought: “all these people speaking today. They are so good, they are the best, the talks are amazing and I know mine is by far the worst. I’m wasting everyone’s time.”

People paid a lot of money to go there and unlike View Source, like side b Ana said, I didn’t have an excuse anymore. In ViewSource I could tell myself I did the best I could. Here I couldn’t. This wasn’t my first time so I should know what I was doing. With no fault of anyone but myself, I felt exposed and vulnerable. I was in front a of a really big audience (compared to a meet-up), the first row full of respected people and I was there “talking about me”. My inner critic was on fire that day and she wouldn’t shut up: “You had one opportunity to make a good impression of yourself and this was it”.

My second mistake was underestimating how my talk worked in that format. I had never done it in a 10 minute slot so I was optimistic in converting a 20 minute talk into 10 minutes and I now think I missed things. This crushed me because I felt like I failed and the feeling of “failure” is something I struggle a lot with.

I was really disappointed with myself that I decided not speak to anyone or check my phone for a while. And then I sat alone for the rest of the day and I allowed my disappointment to grow inside my head. So, don’t do this people - don’t be your own worst enemy.

I had another lightning talk later in the month with Codebar which allowed me to transform my disappointment into something productive. I changed the talk and tried to make it fit better the 10 minutes. That one may have gone a little bit better.

In 2019 I ended up doing three talks and my mood wasn’t in the right place. I tried really hard but my best self wasn’t there. But given the circumstances, I did give all my best and all I had those days.

Why am I writing this?

After my first talk this year, I was so heartbroken that I asked around people if they ever felt like I felt. Not many people replied and few that did highlighted how important it is to learn from these experiences and improve. And I agree! It is by trying and failing that we learn something. But I am still battling this feeling “I had one opportunity to make an impression and I ruined it” so I am still working on figuring this one out and grow emotionally.

I need to practise what I preach though. I talked about sharing whatever you want on your blog and how it may or may not help someone. And I suppose we don’t talk much about failure, emotions and simply being humans.

Even writing this made me wonder “am I overexposing myself?” But I don’t think I care enough about that right now. In all fairness, writing this was therapeutic for me. Hopefully by the end of this year I can look back at this and feel like I have learned a new skill.

A big thank you 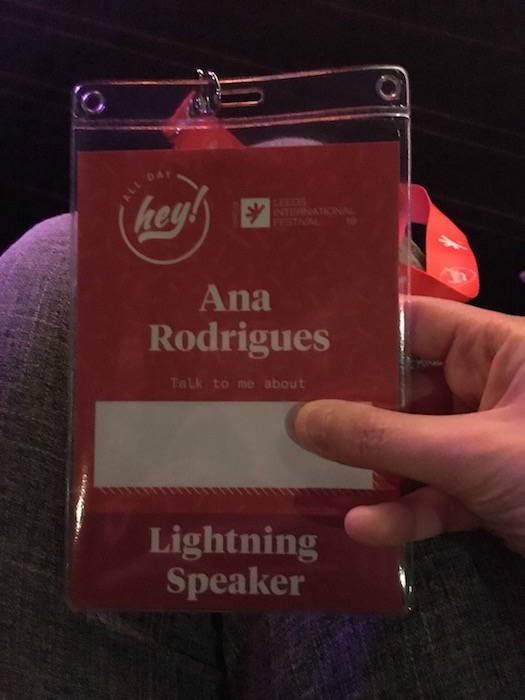 Regardless of my own personal issues I do want to say a big thank to Josh Nesbitt and Harry Roberts who were so kind to me in All Day Hey!. It was there that I got my very first “different badge”. They treated the lightning speakers like speakers and that doesn’t happen often sadly. I genuinely felt included and I will never forget that.

As I’ve been struggling with my mental health this year, it somehow couldn’t have happened in a better place as All Day Hey! is one of the few conferences that cares about the community and all aspects that makes us humans.


Also a big thank you my friend Paul who this year has attended two of my talks to support me. I really appreciate it.

Thank you to Inês for all your support.

A big thank you to everyone at Hactar.

And a big thank you to my fiancé who sees me ugly crying a lot and still wants to marry me.

This section is hilarious! Look at me talking about myself like i’m a thing!!! But in all honesty, I don’t know. I will not be doing any talks this year. I am taking care of myself at the moment but I am enjoying making my blog my little hidden stage.